After completing this lab, students should be able to

This lab has four parts: Parts A to D. The four parts together form a sequence of tasks. These parts are not independent and should be done one after another.

You need to show your tutors all the four parts. Remember you must be ready for some assessment half an hour before the end of the class. These three exercises are worth 2 marks.

For all the programs, we expect that you choose informative variable names and document your program. There is also an online assessment question which is worth 1 mark. We suggest that you attempt this question after completing all the parts.

You should make a directory called lab09 to store your files for this lab.

Imagine a mobile phone game where you use a strawberry launcher to feed an alien. Your goal is to feed as many strawberries to the alien in as little time as possible. Technically speaking, the problem to solve is, for a given location of the alien, what launch speed and launch angle will minimise the travel time of the strawberries from the launcher to the alien.

Remark: The real-life application of this problem is missiles. For this lab, let us be innocent and consider strawberries and aliens instead. 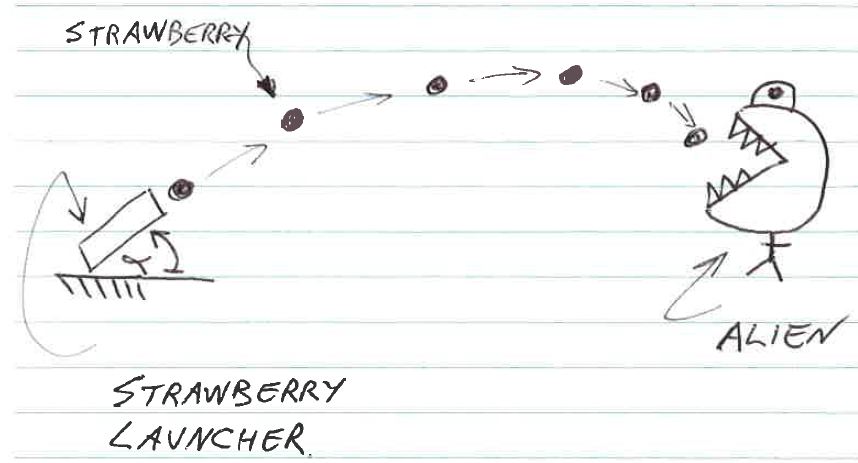 where m and c are, respectively, the mass and drag coefficient; and g is the acceleration due to gravity. Since the strawberry has an x- and a y-component in velocity, its total speed is given by the square root of (vx(t)2 + vy(t)2). If you are interested, Equations (3) and (4) are derived from Newton’s Second Law. Equation (3) says that the strawberry experiences resistance as it moves in the air in the x-direction. Equation (4) says that the strawberry experiences both gravitational pull and air resistance when it moves in the y-direction.

Given Equations (1)-(4), you can use Euler’s forward rule to derive how to calculate the position and velocity at time t + Δ from that at time t. We have derived the equations for you, as follows:

You are asked to work out the other Python statements for updating the elements of the arrays position_y and velocity_y.

where time_array is a 1-D numpy array containing time instances, m is mass, c is drag coefficient, v0 is initial launch speed, theta0d is launch angle in degrees. This function returns two outputs, which are the x- and y-coordinates at the corresponding time instances specified by the numpy array time_array.

The function is missing two lines of code (within the for-loop located near the end of the function), which are the two Python statements for updating position_y and velocity_y. You are asked to fill in these two statements at the places indicated. You may wish to read the function to see what it does. In particular, note that v0 is the initial total speed, which means the initial speed in the x- and y-directions, are, respectively v0*math.cos(math.radians(theta0d)) and v0*math.sin(math.radians(theta0d)).

After you have completed this, you can test the function by using the Python script test_sim_projectile.py. Take a look at what the script does. It defines the problem and simulation parameters, as follows:

We will not change these parameters for this lab.

For this part, you can use theta0d = 35. We will use a range of values for theta0d later on.

If you’ve added the correct Python statements, then a plot of the x- and y-coordinates of the strawberry should look like this the graph on the right. If you get a flat line at the zero level, then your program is still incomplete.

Part B: Determine the landing distance and landing time

The simulation in Part A allows you to determine the trajectory of the strawberry launched at a given speed and angle. Let us now assume that the alien is located at a height (y-coordinate) of +10, and the alien’s can only swallow the strawberries when they are falling down. The trajectory plot in Part A shows that, with a launch angle of 35 degrees, a rough estimate of the landing position of the strawberries will be at the coordinates (96,10). This position is obtained from using visual inspection from the graph. Your task for this Part is to use Python to automatically determine the landing position (assuming a landing height of 10) as well as the time to reach the landing position, from the trajectories computed in Part A.We will define the exact meaning of landing using an example in a moment.

We will give you some idea how you can use Python to find the landing time and position. The trajectory has 101 numbers so it may be hard to work with. So we will use a small example to illustrate the method. This is a typical problem solving technique. If you can solve the problem for a small example, then you can transfer the solution to a larger instance of the problem. Let us assume that you have three arrays px, py and tv, which have analogous meaning to position_x, position_y and time_array that we have used above. We made up some values for the elements of these three arrays:

Note that this example contains the main feature of the problem with the positions in the y-direction dropping from a value above 10 to a value below 10. It means that at some point in time, the strawberry has a height of exactly 10. Instead of determining the exact time of crossing, we use an approximation here. First, we consider only the time instances in the array tv. Second, we say that landing occurs at timet if the vertical position of the strawberry at time t is closest to the level of 10, but is still at or above the level of 10. For this example, landing occurs at time instance 1.7 because the strawberry is just above the level 10, at a height of 10.1 to be specific. At the next time instance, at time 1.8, the strawberry is below the level of 10, at 9.9 to be specific. This is not exact, but if the time increment is small, the error will not be big. (This is also on the condition that the alien opens its mouth wide!) We say that the landing distance (which measures position in the x-direction) is 7.5 and the landing time is 1.7.

We suggest that you work with this example first to find out what Python statements you need to determine the landing distance and landing time from tv, px and py. Once you get this going, you can test whether it works for the time_array, position_x and position_y. If you want some more hint, you can click here.

You should try to do this Part using a script, because you will need to write a function to do these steps in Part C. You can keep the script to show your tutor.

Part C: Write a function to determine the landing distance and landing time

Once you have got Part B working, you should write a function to determine the landing distance and landing time (these are the outputs) from the 1-d arrays time_array, position_x and position_y and a scalar landing_level (these are the inputs). Note that landing_level is 10 but we should try to make the function general so that it can work with any landing level.

The first and last line of your function should look like:

You can test your find_landing_position_time function in the console. Try running

in the console and look at the output. Compare it to your graph you made earlier, does the answer seem correct?

Part D: Determining the launch angle to feed the alien in a minimum time

First, let us recap what you have achieved by now.

In this part, your task is to write a Python script that does the following:

This script does some calculations repeatedly so you need some type of loops (which type?). Once you get your script working, you can plot a graph of landing distance versus landing time. You should get a graph similar to that below.

Let us assume that the alien is at a horizontal distance of 90 from the launcher. You can see from the graph that there are two launch angles that will allow you to feed the alien and one of them will allow you to feed the alien quicker. Your final task is to determine the launch angle to use by using Python statements. You can add these statements to the script and write a Python print statement to display the answer. We do not need a very accurate answer. As long as the launch angle is within 1 degree of the correct value, that is acceptable. You can use any method you like to determine the launch angle. The type of method you used in Part B is also helpful here. 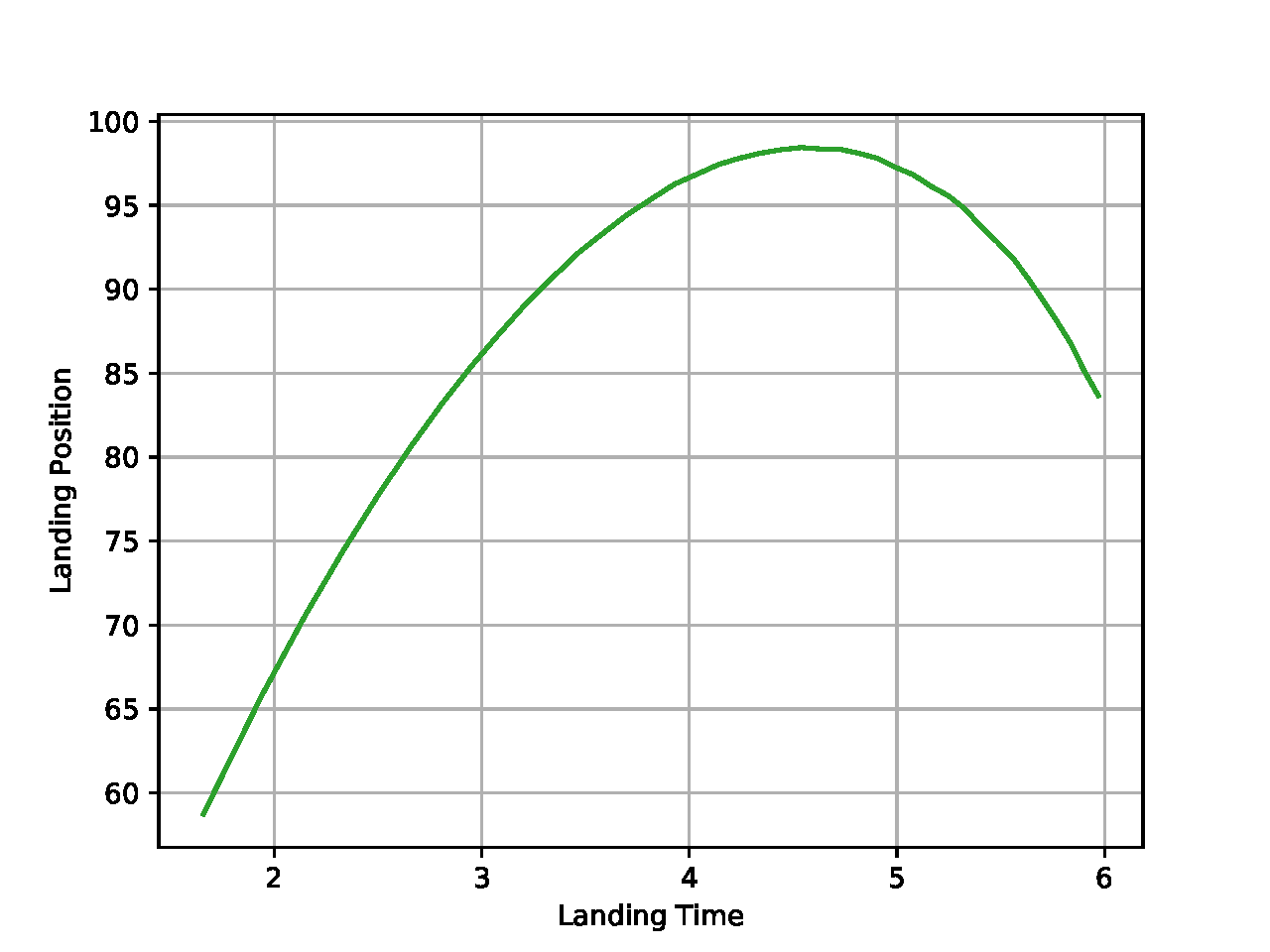 This is “Pages” Sidebar